The original settlement at Wallingford dates back to the dawn of British history, due to its location on the River Thames and being close to the Icknield Way. The strategic importance of Wallingford was evident shortly after Norman the Conqueror was victorious at Hastings and marched up to London in 1066. Having been held back by the natural obstacle of the River Thames he marched fifty miles on the southern side to Wallingford. Having crossed the Thames, where the river is shallow enough to “ford” he marched back to London on the northern side.
A castle was completed in 1071, which became one of the most important castles in England in its heyday. King Henry II held his first parliament in 1154 at Wallingford, and he subsequently granted the town a charter. The town also received a mention in the Magna Carta of 1215, along with only a handful of other towns.
During the Civil War (1642-6) the town was occupied by Royalists sieged by Parliamentary forces. The Castle was then demolished stone by stone on the personal order of Oliver Cromwell; all that now remains are the ruins of a tower facing the river, a small section of the hall overlooking the northern moat, the massive earthworks and a castle mound.
From this time, the town’s importance began to decline but much architecture from the middle Ages still remains. The magnificent stone bridge is similar to the old London Bridge. Both bridges have nineteen arches, and Wallingford Bridge is 900 feet long – 15 feet shorter than the old London Bridge. (Read more about  the bridge here.)
Today Wallingford is a bustling market town with a population of nearly 7000.

In the mid 1970’s three families were living in Wallingford, but were in fellowship at neighbouring assemblies. For seven years these believers were exercised about bringing the gospel to people in their locality and they held a weekly prayer meeting in their home. On 1st October 1978, the assembly was formed with the fellowship and commendation of neighbouring assemblies.  For seventeen years the assembly met at the Scout Hut, off Station Road, looking for a site to build a Gospel Hall. Land became available when a new housing development was commenced in the 1980’s. However, it was not until the 1990’s that land could be acquired to build the Hall. In October 1995, the new hall was opened on the site of an old Work House, Atwell Close. 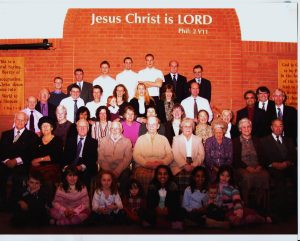 Fill out the form below to receive your free bible, courtesy of the Wallingford Christian Assembly.